We have not yet lost hope

Rabbi Gilad Kariv’s remarks from the rally outside the Prime Minister’s residence. 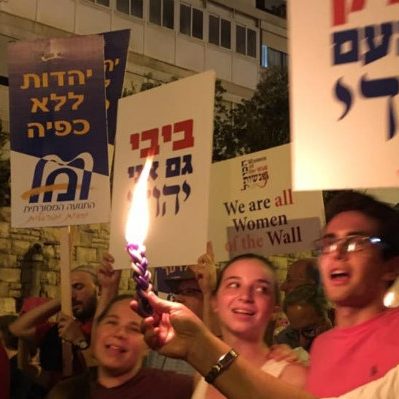 When we scheduled this rally a few days ago, at the height of the stormy week that we have just witnessed, we did not know that the prime minister would be overseas over this weekend. But in many ways, the fact that the person in charge is not home this evening, signifies well what happened a week ago at the prime minister’s office. The prime minister abandoned his shift and his responsibility and allowed his most extreme ministers – those who have hardened their hearts to anyone who thinks differently from them – to set the tone. Packed with arrogance and hatred, they celebrated the closing of the gates in the faces of those who wish to join the Jewish people, and lift the partition and walls in Jerusalem even higher.

We, together with our many partners in Israel and around the world, entered into this embarrassing and dangerous lack of governmental leadership – our voices loud and varied, yet announcing in one chorus: no more! No more blind hatred! No more hypocrisy! No more redundancy! No more signing of agreements, only then to turn them into empty promises! No more being rewarded for despicable acts! No more speaking about unity on the one hand and acting divisively on the other! No more making one statement in English in Washington and a completely opposite one in the government offices in Jerusalem. No more! In the place where the prime minister was supposed to draw a red line, we did so instead; in the place where his coalition partners, the ministers of education and diaspora affairs, finance and defense were supposed to sound a clear voice, we, together with the majority of the Jewish people, sounded our voices. The prime minister thought that his eloquent statements will help him turn the freezing of the Kotel (Western Wall) resolution and conversion law into fighter jets, which do not appear on the radar screen of the Jewish people. The prime minister’s advisors and self-proclaimed experts whispered in his ear that Diaspora Jewry is tired; that no one is really interested in the Kotel resolution; that he could convince everyone that the conversion law does not really affect the Jewish world. Together, we proved him wrong.

And just as we did so this week, together and with perseverance, in Hebrew, English, French, Russian, and Spanish – so will we continue doing so in the coming weeks and months. On this stage, just like on any other media and public stage, we are making clear to you, the prime minister of Israel, that we will not allow you to give the extreme ultra-Orthodox rabbinic establishment a monopoly on conversion. You may be willing to break the mitzvah of “And a stranger shalt thou not wrong,” for the sake of your government’s survival – we are not! We did not allow you to do so 20 years ago when you advanced the conversion law proposed then; we did not allow you to do so seven years ago when you supported the Rotem law on conversion; we will not allow you to do it this time either!

At the same time, we are also making clear to you and the rest of the ministers – we will not agree to the embarrassing zigzag regarding the Kotel, and we will not buy into your publicity stunts at Robinson’s Arch! We have already proven that, for the sake of shalom bait (peace in the house) and the unity of the Jewish people, we are willing to accept a complex compromise, one in which we received a lot of criticism from within. Keeping us behind barbed wire fences; taking us out of the Jewish camp; and to the absurd expectation that we would forgo our right to take part in managing the place in which we pray – we will not allow any of this! This evening, we demand that you undo the government’s decision to freeze the Kotel resolution. Just as you were wrong in anticipating the reaction in the Jewish world to the government decisions last Sunday, you are also wrong now if you think that the storm in the Jewish world will die down. It is on the waves of this storm that we will walk into the Supreme Court on the eve of Tishah b’Av. There, we will find out who internalized the lesson that Jerusalem was destroyed over blind hatred, and who allows the flames to rise yet again. In the courtroom, we will make our position clear – if the government is set on killing the Kotel resolution, then we will demand the division of the main plaza into three sections. Anywhere the government freezes its commitment – we will freeze our willingness to compromise.

Dear friends, we have not been the only ones to make our voices heard over the past week in Jerusalem. Not far from here stands the tent of the parents struggling to ensure proper care for their children suffering from cancer, as well as the disabled fighting for equal rights. We have not come here tonight to respond to other public and social struggles, and it is quite possible that the positions of the many people here on those matters vary. But from this stage, it is only appropriate to announce that while we fight for our rights, we also remember our duty to “do justly, and to love mercy,“ and heal the wounds of this land.

Many of those wounds are the result of that same bullying, unwillingness to compromise and look one another in the eye, even during a time of disagreement. Our struggle over conversion and the Kotel is part of a greater effort to build an all-encompassing, tolerant society, one which strives towards justice and compassion, and these are the values that stand before us in the current struggles, guided by the commandment to “set God always before me.”

In just a few minutes, we will all head home. Let us promise ourselves that this rally will not just be a moment of relieving stress and letting out steam, but rather the first step in an ongoing public effort in the coming weeks and months. We must remember that we have a long road ahead and it is better if we can walk it together.

We are committed to the establishment of an egalitarian, official and respectable prayer platform at the Kotel, but even more so, we are committed to creating a reality wherein every Israeli city and regional council, in the center and in the periphery, will have an egalitarian and inclusive, Reform and Conservative synagogue, which is involved in the greater community and takes an interest in what happens around it.

One that serves as a center of Torah study and g’milut chassadim (acts of loving kindness). We are committed to preventing the damaging conversion law, but no less so, we are committed to opening more conversion courts, higher education institutions, kindergartens and schools, and more and more branches of Noam (Conservative youth movement) and Noar Telem (Reform youth movement), pre-army mechinot (preparatory programs) and social justice projects.

David Ben Gurion once said that if all lights in Israel were turned off, other than the ones in the corners of the country, the security borders of Israel would be lit up. Together with all our partners in the field of pluralistic Jewish renewal, we are committed to create a reality by which the lights in our congregations and institutions will draw the security borders of the Zionist vision and of the future of the State of Israel as a Jewish and democratic state, which treats its citizens and residents with equality, respect and responsibility. Together, we will succeed.

And may we remind you, the prime minister and ministers of the Israeli government, what we learned from King David, the descendent of Ruth the Moabite, a convert and founder of Jerusalem, in a chapter of Psalms that was set as a song for Sunday, the day on which the government gathers for its weekly meeting: “Who shall ascend into the mountain of God? and who shall stand in His holy place? He who has clean hands, and a pure heart; who has not taken My name in vain, and has not sworn deceitfully.”

Thank you all. Thank you to everyone who worked hard to make this rally possible.

Thank you to all those who spoke and, of course, to all our many partners in Israel and around the world for your efforts.

We have not yet lost hope – HaTikvah.

Rabbi Gilad Kariv is president and CEO of the Israel Movement for Reform and Progressive Judaism.